Today, the global wind industry is bothered with several, as it seems, insurmountable challenges such as:

Because of the above-mentioned hazard issues, large wind turbines cannot be used near or within human settlements and they are not especially nature friendly either.

In regards to all of these large scale development problems we came up with VETROHVAT “The Wind Catcher” and VETROSTUB “Wind Pillar”, unique, patented solutions.

Both VETROHVAT and VETROSTUB are VETAR 15 based modular solutions for a large capacity wind energy conversion.

Advantages of our approach over large conventional wind turbines:

Much easier maintenance - it is much easier to clean and fix small size units than very large ones.

Much easier installation of turbines - once the mainframe installed, each turbine weighs only 760 kg, can be installed using even the smallest cranes which will simply place the turbine on its position.

Hybrid technology approach - same technology base can be used for other purposes, like telecommunications (Wi-Fi emitters, cell phone emitters, etc.) and security purposes (radars installations). It can also be upgraded with solar panels.

Birds and bats friendly - differently from large wind turbines, which kills millions of birds and bats every year, ducted fast-rotating rotors of  Vetar 15 wind turbines are very noticeable for birds and bets which makes killing them or injuring them by turbines blades virtually impossible.

No ultrasound - Vetrostub and Vetrohvat based systems do not produce infrasound that is not good for human or animal health. 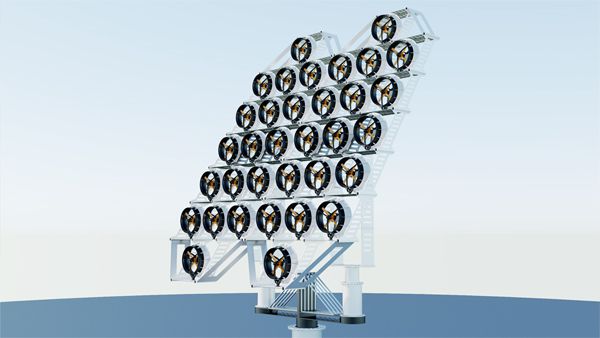 Due to its modular nature, it comes in 8 configurations from which two (75 kW and 105 kW) have two configuring types. Power configurations range from 45 to 510 kW. Each of these configurations can be additionally configured (changed) at a 15 kW power level.

Vetrohvat is extremely useful in a situation with maximum height regulations as it can spread its power configuration in width instead of height.

Even in case of malfunctioning of some Vetrohvat elements, it will never stay idle, which is not the case with conventional wind turbines.

Vetrohvat can be upgraded with solar PV panels and become a wind-solar hybrid.

Each unit of Vetrohvat with power output higher than 100 kW also comes with one of our custom-designed inspection and maintenance UAV (Unmanned Aerial Vehicle) from Letogled UAV products family. 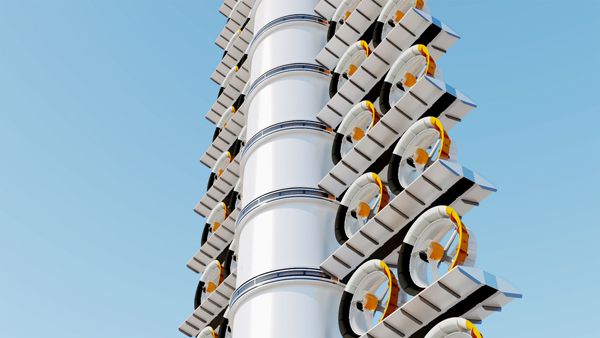 Power configurations, for wind only, range from 570 kW to 2250 kW. Each of these configurations can be additionally configured (changed) at a 15 kW power level.

Each power and height segment consists of four Vetar 15 wind turbines and can be upgraded with 32 PV solar panels which add, per one height segment, 5.6 kW of installed power.

An additional 5.6 kW of PV power is installed in the last segment at the top of the pillar.

Therefore, there are 3 power types are depending on the configuration. These are:

The same goes for 2MW option where we have:

Vetrostub is as many times more reliable, relative to conventional wind turbines, as much as wind turbines it has. This in return has much less O&M costs compared to traditional turbines as well as almost nonexistent interruption time allowing the system to operate at near 100% of availability.

Even in the case of individual Vetrostub elements malfunctioning, it will never stay idle which is not the case with conventional wind turbines.

Each power level on Vetrostub has an independent yaw mechanism which makes possible full utilization of wind energy relative to wind velocity and direction changes at different height levels. This feature along with other unique features makes Vetrostub a unique wind and solar energy conversion solution

Here you can find some exemplary comparison among Vetrostub and conventional wind turbines.

For more information and comparison, details feel free to reach us directly.

Each unit of Vetrostub also comes with one of our custom-designed inspection and maintenance UAV (Unmanned Aerial Vehicle) from Letogled UAV products family.

Industrial-scale RWTs cannot be used in an urban environment nor close to any urban settlement.

RWTs have “vampire” consumption or negative production of approximately 10% when the wind does not blow as they need to use energy to slowly turn blades so that the shaft does not bend.

RWTs spend 5-10% of the time for maintenance when the wind turbine does not operate and does not produce any power.

In all, due to the above issues, RWTs will produce 20-30% less than projected.

VETROSTUB is the only solution know today for industrial-scale wind energy conversion (higher than 1MW) which can be safely used in an urban environment.

VETROSTUB does not have “vampire” consumption as it uses smaller VETAR wind turbines that have no problems with shaft bending therefore all energy produced is fed into the grid.

VETROSTUB is a modular solution. This means that even when maintenance is being performed at one individual VETAR wind turbine all others are still in function making power.

VETROSTUB has no large issues with blades degradation as it uses multiple small VETAR wind turbines which are more resistant to blade erosion and are smaller targets for insects which means fewer problems with insects depositing at turbine blades.

This is why you can expect for VETROSTUB to be 20-30% more efficient compared to corresponding power-producing RWTs.

VETROSTUB is highly scalable, can be upgraded/integrated with other technologies (telecom or radar equipment) on which way it is widened purpose of VETROSTUB application with significant added value.